As Americans went home on Monday May 4th, 1970, many were greeted not by the welcoming embrace of their families but instead by what was displayed on their television sets. Earlier that day, four students were shot by the Ohio Army National Guard at Kent State University, following protests by students against the continuing war in Vietnam.

While the horrors of friends standing over the bodies of fellow students captured the nation’s attention, Universities across the country – many of which were already witnessing protests of their own – attempted to reconcile what happened and move forward.

On the same day as the Kent State shootings – before anyone was even aware of the massacre – the Association of Bucknell Students (ABS) and faculty of the University each passed a resolution to request that classes be canceled the week of May 4th through the 9th. President Charles H. Watts II sent out a letter to students and parents on May 6th supporting this step due to “concerns…about recent and continuing developments in Southeast Asia.”

The protests at Kent State and Bucknell, as well as hundreds of schools across the nation, came following President Nixon’s announcement of the Cambodia Incursion – a proposed military operation along the Eastern border of Cambodia with Vietnam that would strike against Vietcong military installations and supply routes.

Acknowledging the dramatic ramifications that this proposal would have on the increasingly escalating war, the ABS adopted three major demands in their resolution:

1) The immediate withdrawal of U.S. troops from Cambodia and Laos

2) Permanent cessation of the bombing of N. Vietnam and

3) Withdrawal of troops from Southeast Asia by December of 1970.

The faculty adopted a resolution that voiced solidarity with the ABS and stated that they accepted “the concerns by Bucknell students in their slogan ‘On strike, open it up and keep it open'” and proposed canceling classes to address the “current national crisis.” Working with the students and the administration, the faculty scheduled a series of events meant to help educate and discuss the ongoing war in Southeast Asia, providing students access to information that might have otherwise been lost to them.

The atmosphere of protest and education grew to envelope the entire campus for that week in early May. From Tuesday until Friday, the Bucknellian published daily schedules of strike activities and open lectures that would be available to all students. This series featured prominent members of the faculty speaking upon their respective fields in relation to the crisis in Asia.

The concurrent protests at Bucknell and Kent State echoed the concerns of the population of young people at large. As the country pivoted towards an uncertain future, it became clear that the fate of thousands of young men hung in the balance.

The actions of the faculty and administrators at Bucknell University are commendable in that they made it clear that the future of the University was indelibly tied to the condition of their student population. As President Watts stated at the end of his letter, none of these actions were “construed or intended to be against the University.” The purpose of an education is to enlighten students on their position in society; this week took those abstract principles and connected it with the immediate lives of students.

What was shocking about the massacre of students at Kent State was not only that it was senseless killing; it was that it could have happened anywhere. The protests occurred because students were powerless to be heard or to have control over their own lives. Recognizing this, Bucknell sought to foster a critical and constructive environment where students could develop a sense of the world and their place in it. It was one of those rare moments in history where the value of a broad, liberal arts education asserts itself through the passion and determination of everyday students. 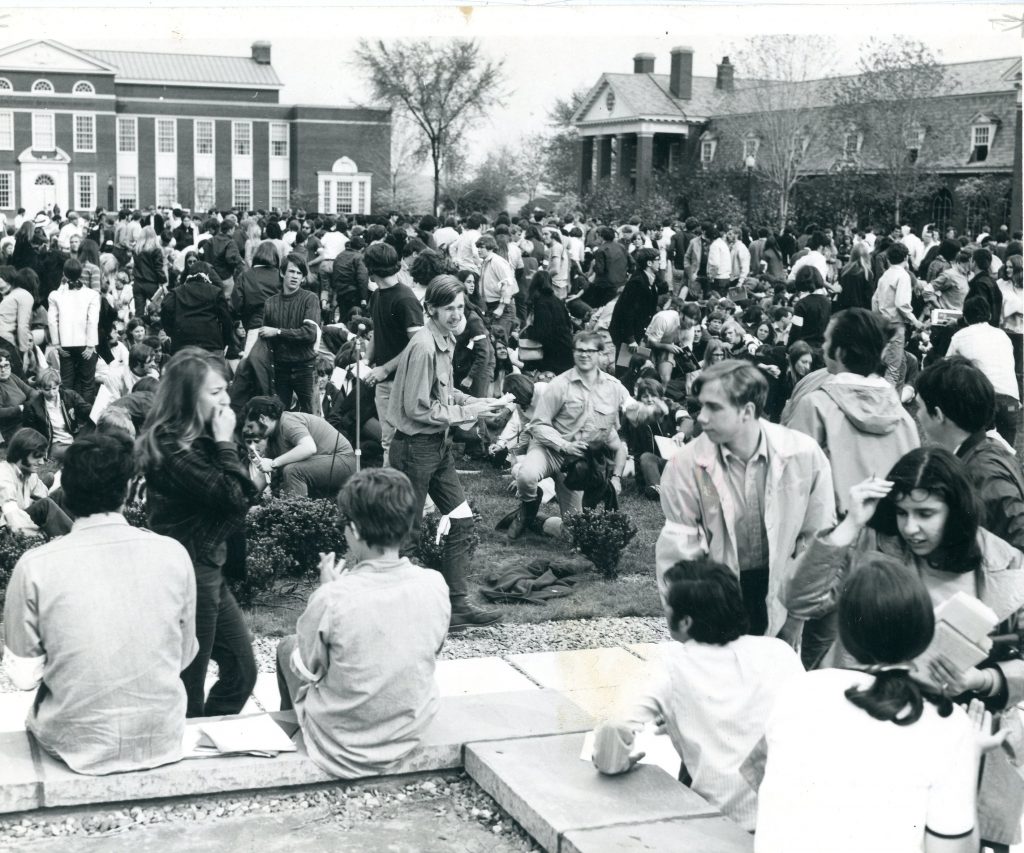 Bucknell students attending anti-war protest and forums on the main academic quad, May 1970

Posted by Tom Bonan on May 6, 2015
Comments Off on Kent State Protests and Bucknell